Figure Eight: The Magic of AI in the Real World

Lukas Biewald, Co-founder
When Lukas Biewald and Chris Van Pelt laid the foundation of CrowdFlower, a company that enabled data scientists to enrich data, the partners knew that data would be the key to making every algorithm useful for the days to come. However, eventually CrowdFlower’s CEO Robin Bordoli sharpened the company’s focus on the market of machine learning before it became a buzzword. As CrowdFlower moved forward, the company’s offerings were much more than the name connotes. Since its name and the perceived market position created ambiguities, they finalized a name change that came with an alteration in the identity of the company. The team decided to exit from the serenity of bluish hues of CrowdFlower that would not do justice in narrating the true story of a company engaged in the emerging innovations like artificial intelligence (AI) and machine learning (ML). To reveal the company’s true sense, the team ultimately chose a deep green and silver to represent nature and machine respectively. Together, this unlikely pair of pigments echoes the essence of what the successor of CrowdFlower, Figure Eight does. The company facilitates the combination of humans and machines to allow them to work mutually for creating innovation with the human-in-the-loop AI platform. Figure Eight is dedicated to making machine learning and AI work in the real world. Founded by the data scientist team, Figure Eight provides businesses of every type with high-quality training data that drives projects for the most innovative companies in the world.

Today, Figure Eight is one of the most essential human-in-the-loop AI platforms for data science and machine learning teams. It trains, fine tunes, and tests machine learning models to make AI-based applications as interactive and effective as possible. Figure Eight’s technology seamlessly works with a wide range of data types such as text, audio, video, and image. The Figure Eight platform operates at an unprecedented scale and has generated over 10 billion data labels to power AI applications. Based out of San Francisco with its presence in Tel Aviv and backed by Trinity Ventures, Canvas Ventures, Microsoft Ventures, Industry Ventures, and Salesforce Ventures, Figure Eight serves Fortune 500 and leading data-driven organizations across a wide variety of industries.

Figure Eight’s presence can be felt in most of the modern applications as AI has become an integral part of everyone and everything today. For instance, most of us may not even realize it, but AI is all around us, helping in from finding weather, to automate route maps and customize music streams. All these applications of AI may be different, but they all have one thing in common—the Figure Eight expertise.

The technology behind these applications includes speech recognition, search, mapping, natural language processing, personalization, and computer vision which require extensive training to reliably accomplish a task that may seem trivial to a person. Figure Eight assists businesses to train all these types of different AI-based applications. Figure Eight’s human-in-the-loop technology allows people to interact with AI to train it as efficiently and as accurately as possible. With Figure Eight, customers can upload their data and indicate the requirements, choose from over 50 different templates and customize their training task through job description and workflows, and Figure Eight’s experts perform the rest.

Figure Eight’s customers harness the power of human intelligence to generate ground truth data that can be used to train complex AI systems. For instance, think about the future of transportation where vehicles need negligible human intervention and can safely navigate the space around them. This future will be powered by countless hours of dedicated human effort to teach machine learning systems to help vehicles travel autonomously, to understand the environment such as stop signs, pedestrians, and the distance between vehicles. The AI system of the car learns to answer these questions through comprehensive human guidance and training.

The company powers computer vision algorithms to enable applications to perform operations such as helping satellite companies and self-driving cars to work efficiently by mapping locations. For online shopping companies, Figure Eight enables customers to train from deep and complex applications to support products along with text and speech space search with natural language processing.

Figure Eights patented quality control also allows customers to utilize their own analysts or access hundreds of thousands of contributors in the AI marketplace. With Figure Eight, customers can specify languages, select regions, or even hire dedicated specialists who can work under NDA and direct instruction for sensitive and complicated tasks. To ensure quality results, the platform integrates quizzes and periodic quality checks to keep track of a contributor’s performance without interfering with the workflow.

Furthermore, the company also deploys deep learning models for a customer to use at scale, so the once labor-intensive task can now be automated, applying AI to millions of data points in fractions of a second. The company assists its customers with machine learning either on the Figure Eight platform or within a customer’s cloud environment delivering total control and visibility. Whether the customer needs data, create an AI system from scratch, or learn more about how to combine human and machine intelligence, dedicated teams from Figure Eight are always there.

With a focus on delivering the best customer experience, Figure Eight partners with some of the top technology companies and BPOs. The company’s wide partner eco system including Amazon Web Services, Goolge Cloud and IBM are key to its success today. To help accelerate the accessibility and adoption of AI in the real world, Figure Eight is the official launch partner for Google Cloud AutoML. Also, Figure Eight is an inaugural partner for Amazon Web Services (AWS) machine learning competency partnership. Whereas, Figure Eight’s partnership with the IBM Watson Studio community enables Watson Studios customers to annotate and label data via an in-product integration directly.

"With Figure Eight, customers can specify languages, select regions, or even hire dedicated specialists who can work under NDA and direct instruction for sensitive and complicated tasks"

Hundreds of organizations focusing on ML solutions trust the Figure Eight platform to train and tune their innovative ML solutions. In one instance, Figure Eight supported TalkIQ—a company delivering real-time speech recognition and natural language processing technologies—to reach an accuracy threshold to make their models a success. TalkIQ collects telephonic audio and transcribes it with in-house speech recognition models, and uses natural language processing algorithms to comprehend every conversation. However, as every company is different and has a diverse target market, similarly TalkIQ’s each client needs a robust set of unique training data to make the solution work. TalkIQ had worked with a competitor of Figure Eight for six months but were having trouble reaching the required accuracy threshold to make their models a success. Put simply, the labels they received weren’t good. With Figure Eight, it only took a few weeks for the change to bear fruit for TalkIQ and experienced an accuracy of up to 88 percent. They’re pushing their transcription models through the Figure Eight platform, transcribing audio, categorizing key points and other essential data classifications, as well as verifying internal transcriptions and outputs of their models. They even use Figure Eight’s geolocation tools to make sure British contributors label colloquial speech from the U.K.

Composing the Future of AI

With contributors from all walks of life and all corners of the world, Figure Eight holds an acclaimed reputation in the industry today. A large number of partner channels are also working with Figure Eight to provide a steady contributor base that works around the clock to solve all kinds of data problems. As part of its growth plan, Figure Eight recently announced that its production-quality ML algorithms and models would be available on Amazon Web Services (AWS) Marketplace for ML, which allows developers and data scientists to find and procure ML algorithms and models and deploy in Amazon SageMaker. With the right people, experience, and knowledge, Figure Eight focuses on enhancing its capabilities, while delivering custom models for the growing AI requirements. 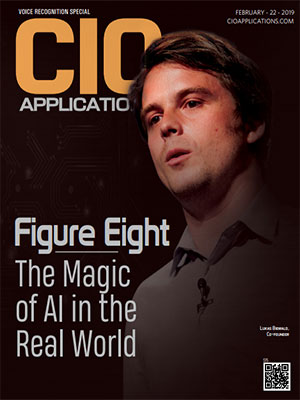